Taking missions from contacts is one of the primary ways for a Star Trading Captain to advance their careers. They are especially important in the early game as a captain is building up his or her abilities and growing a network of contacts and faction support. There are many different types of missions and most captains will become specialists in completing and maximizing the profits of a certain set of missions. Missions provide numerous benefits including payment, increased reputation with a contact and faction, experience and the ability to influence conflicts. All missions require travel to another zone to complete and many missions will entails some degree of risk above and beyond those involved in regular travel.

All missions are given by a contact, though not all contacts will offer missions. See contact services to determine which contacts give missions and their mission types. When designing a new captain template it is very important to ensure that you have at least one contact who offers missions, preferably more. Missions are one of the few contact services that are not limited by a captain's reputation with a contact or faction. However having a better reputation will cause the contact to offer a captain more and better missions and allow the captain to accept more missions from that contact. For each reputation level of 20/50/100/250 a contact will offer a Captain one additional mission to choose from. At high reputation a captain can accept up to four missions from a given contact. Better paying missions will also be offered with higher reputation.

Certain missions will have certain prerequisites. These could be certain upgrades to the ship, such as a passenger cabin or prison cell or a certain level of edict with the faction. Lacking these prerequisites will not prohibit a contact from offering a certain mission, but the player will not be allowed to accept them and will be given a message describing what is lacking. However, smuggler missions which can require a captain to purchase certain goods can still be accepted without having a sufficient trade permit with any faction. This is because the goods may still be available at Independent Zones or Black Markets.

The outcome of any mission depends on theme it was selected from. Contacts will offer three themes to choose from which will rotate every so often. These themes are usually based on a current conflicts, the contact's faction the contact's specific traits or the friendly/hostile relationship the contact has with another contact. This is particularly useful when a player want's to influence the outcome of a current conflict.

All missions will have a deadline they need to be completed within. While most missions can still be completed after a deadline has passed they will offer significantly reduced rewards. When considering which missions to take it is very important to consider the deadline of a mission. Contacts can offer missions that vary from being impossible to complete on time to ones that give you a huge surplus of time to comfortable complete it in.

Story Missions follow the central story of Star Traders Frontiers and are available to all Captains in all games at their given time. Though part of the core story, they are still an entirely optional part of the game and are not necessary for moving the Eras of the story forward. The missions are limited to certain Eras and can be picked up in each era regardless of earlier decisions. Some story missions follow a more prescribe arc, with each mission being more or less scripted. Others follow a looser system where X number of certain mission types are required. There are also Story Vignettes which are mostly unrelated to the central story and do not automatically appear for all captains. Follow the link to the Story Missions page for detail on missions that are tied to the main storyline.

Story Vignettes are events that will occur when a player lands in certain zones when the right conditions are met (era, faction etc.). Some of them are very short and will be resolved immediately in that zone, other Vignettes will include multiple missions and could take years to accomplish. They are not related to the central story missions and are entirely optional, however they often provide unique rewards above the level of regular missions. Follow the link to the Story Vignettes page for detail on missions that you might become involved.

This article is a stub. You can help Star Traders Wiki by expanding it.

This article is a stub. You can help Star Traders Wiki by expanding it.

Sometimes, not everything goes right with a mission. There are four possible fail scenarios to consider.

If you attempt a mission step but fail it -- by losing a combat, failing a Skill check or other failure condition the mission immediately ends. All future steps are canceled and you will not be paid the offered amount. Because a single mission step failure ends the entire mission, it is very important to use options that have Saving Talents available. It is possible, but not always the case, that you will lose Reputation with the Contact who gave you the mission and their faction.

If you do not complete a mission within twice its original duration, the mission is considered a failure and removed from your mission list. At this time, you lose Reputation with the Contact who gave you the mission and their faction. Notably, this Rep penalty is higher than canceling the mission.

You have the option to manually cancel missions from your mission list. The penalty for cancelling is not as harsh as failing the mission due to it being doubly late. This is a wise way to mitigate Reputation loss if you realize that you have accepted a mission that you will not be able to be successfully completed. 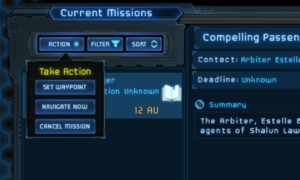