Willingly or unwillingly every Star Trader Captain will have to engage in ship to ship combat during their career. For some it will only be with the thought of escaping as quickly as possible and for others combat will be sought out with dreams of illicit riches, pursuit of glory, or bitter vengeance. The possibility for combat exists any time the captain encounters another ship while navigating the void. In the initial encounter screen various options will be presented to the captain depending on the other ship's type, Faction conflicts, rumors, Faction Reputation, and available Talents which factor together to determine contact's hostility. If the result of the encounter is combat, the captain will immediately be brought to the Ship Combat screen. 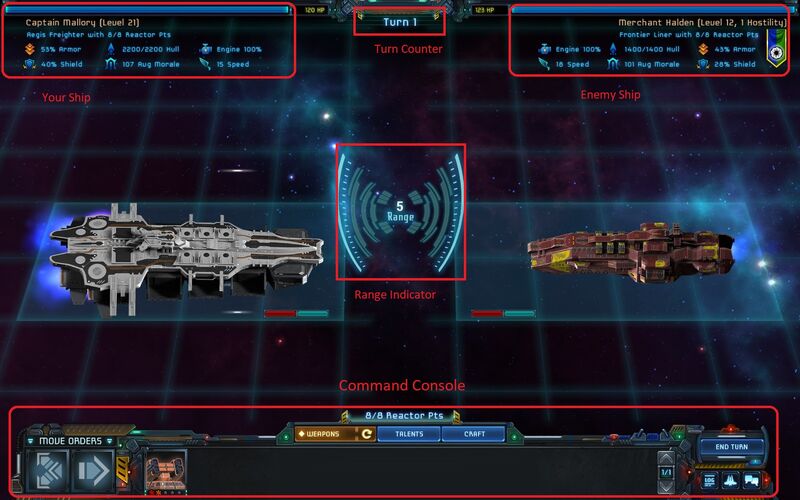 The player's ship will always be on the left and the enemy ship will always be on the right. Each combatant's key statistics are found above their ship and the turn and ship range indicators are placed between them. The lower part of the screen hosts the Command Console, which the captain will use to give orders to his crew. Ship Combat is turn based, with each captain giving simultaneous orders which are then resolved at the same time, when the captains select the End Turn button. Each turn, the captain can give three types of orders; move orders, weapons orders, and talents. Each of these orders may consume Reactor Points, so it is up to the Captain to decide how he or she will use the Reactor Points the Engine generates.

The first order a Captain will be asked for is move orders. These orders will affect the distance between the two ships, known as the combat range. This is indicated by the rangefinder, displayed between the two opposing ships. Range varies from 5 (farthest) to 1 (closest). It should be noted that distance between ships on screen will not actually change. Only the range indicator will tell the player how far apart the ships are. Captains will be given the choice to either advance or retreat, both of which cost Reactor Points. Issuing movement orders is not mandatory, and can be skipped. This is regarded as attempting to hold distance and will not cost reactor points, freeing up more points for weapons. Since both ships are issuing separate and possibly opposing move orders the final results will be determined after the End Turn button is pressed, and after all Talents and attacks have been resolved. Depending on the skills of the Captains and the stats of their ships, it is possible that range will be held, gained or lost.

At each end of the range spectrum special options are given. Combat starts at range 5 and a retreat order at this distance is an attempt to escape combat. If successful, combat will end. If unsuccessful however, the other ship may be able to hold or even gain range. At range 1 the captain can issue a Boarding order. If successful, this will result in Crew Combat, as his or her ship sends over a boarding party to raid the enemy crew, killing some and, if victorious, allows the ability to directly damage the enemy ship components. Certain talents can also allow for boarding at ranges greater than 1.

Beyond escaping and boarding, range is important because various weapons only function at or function better at certain ranges. Depending on the stats of the ships and weapons he or she has equipped, each captain may have an optimal range from which they prefer to do combat. 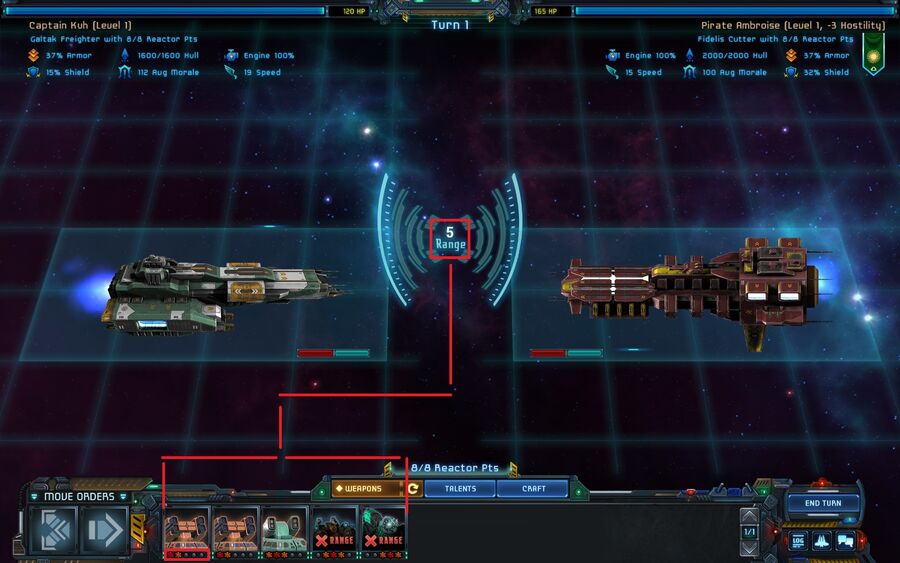 You may choose to fire one or more weapons per Turn. Each weapon costs a certain number of your limited Reactor Points to fire. Weapons are also limited by range and you may only give firing orders for weapons that are valid at your current range. Ranges at which a weapon can fire are indicated by red dots below their icon, with grey dots representing the ranges they cannot be fired at. Every weapon also has an optimal range at which it performs at its best, with no penalties to accuracy or damage. This is indicated by the lighter orange dot(s) below the icon. The dots correspond with the different ranges from left to right. The leftmost dot is range 5, and the rightmost dot is range 1. In the image immediately above, the currently selected torpedoes can be fired at ranges 5 and 4, with 5 being the optimal range. The Railgun to the right can be fired at ranges 4-2 and its optimal range is 3. Because the ship is currently at range 5 the Railgun shows the "X Range" indicator.

Successful attacks may result in crippling effects being placed on either the player's or the enemy's ships. These will appear as little icons just below the image of each ship, which can be viewed by a mouse hover or tap. Some crippling effects can be caused by weapon damage alone which is based on the weapon's damage type. Others debuffs require the the use of Talents and a successful hit with a weapon.

You may choose one Talent per Turn to use. If the Talent is a Buff or a Purge, it is applied immediately at the start of your Turn and effects all movement and firing orders for the turn. Some Talents are limited by range and you may only pick from Talents that may be used at your current range. Some Talents will provide buffs that can also increase reactor points. All buffs and debuffs stack. So multiple uses of the same buff continue to increase effects until each application of the buff expires. An info button is located near the bottom left side of the command console. It will give you info about the talents you have selected.

The move and talent orders you have given will be displayed on the left side of the command console. You may also continue to use the "Move Orders," "Weapons" and "Talents" buttons to modify any orders. When you are satisfied with the orders you have given choose "End Turn" on the right side of the command console. The enemy Captain will complete their orders, all orders will be processed and combat will ensue.

If you are equipped with a launch bay and can support one or more Small Craft, you can select a flight plan for any currently prepared craft. Each flight plan costs 2 RP to launch, but otherwise behaves similarly to talents. These can be launched from any range, and can be relaunched as long as you have enough Water-Fuel to pay for each flight plan.

Flight plans do not count against your limit of 1 talent per turn. If you have 3 operational bays with the Launch capability, 3 small craft prepared, and 3 pilots, you can launch all 3 small craft and play 1 other talent in the same turn. Beware, so can the AI's carriers! 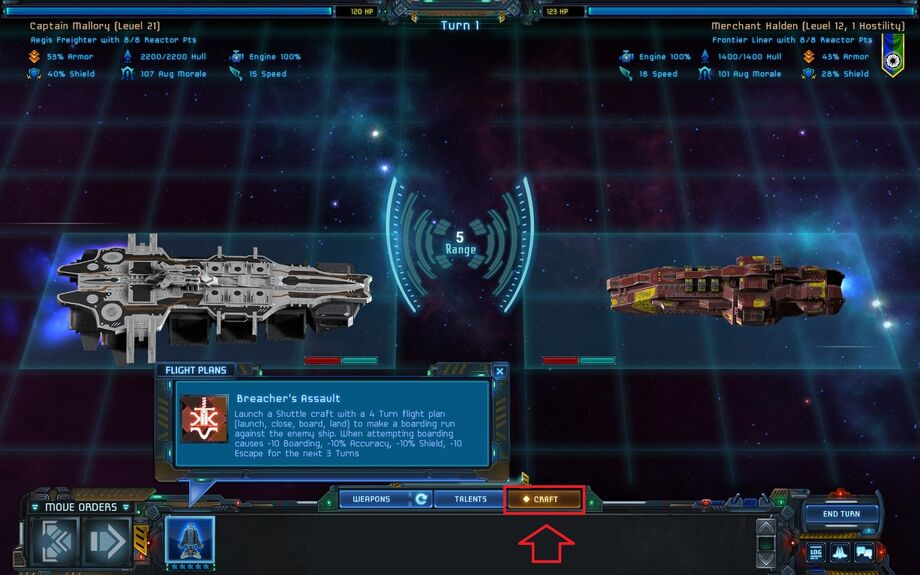 The Skill Pools and ship scores used for ship to ship combat are split into two categories -- those used for Long Range (5 and 4) and those used for Close Combat (3 to 1). Depending on the range between the two enemy ships, a different set of dice are used for each operation.

During ship combat, the dice you roll for each Skill Pool for your ship stats cannot exceed the requirements of your ship's components. If your ship requires 12 Pilot then you can at most gain 12 dice during combat from your crew's Pilot Skill Pool and cannot gain any additional dice. Again, if your crew exceeds the 100% threshold, you do not gain additional dice in combat. (However, outside of combat, the threshold between 100% and 200% grants bonus standard dice. Nothing is ever gained above 200%.)

Therefore, when planning for ship combat it is especially important to have at least 100% of your Ship Skill Pool requirements to max the Strong Dice. It is also important to ensure you have a safe amount over the requirement in case you sustain casualties or crew drop out of combat due to low Morale.

Important strategy to note: For non-combat Skill Pools, should your percentages exceed 200%, it is advisable to upgrade your ship components for higher ship requirements (ie. more baseline dice), or consider purchasing a new ship with higher operational skill requirements. For combat Skill Pools, you should start considering upgrades as soon as you have safely exceeded 100%. This makes it even more important to upgrade your ship components for combat.

Notably, if your Gunnery Ship Pool is understaffed, you do not add any Tactics Skill Pool while attacking.

In ship combat, the faster ship (based on engine Speed/Agility) gets a bonus to Range Change (including Boarding & Escaping), Attacking, and Defense. These benefits are based on the relative stats (ratio) of the two ships' engines (higher engine's stat divided by lower engine's stat). Range Changes (and Boarding/Escape) also give different bonuses at long-range (4 and 5) than at short range (1, 2, 3).

Ship combat ends when either party is defeated or successfully escapes. In the case of escape, each ship is left free to resume travel through deep space, though they may have sustained heavy damage and/or casualties.

A ship is defeated in combat under one of a couple of different scenarios. Take these conditions into account to create the best ship combat strategy possible. Resilience to defeat is a critical part of surviving harrowing combat in the void.