The Skills of your captain, officer, and crew are challenged in many different operations as you travel, explore, and fight your way across the Quadrants. When it comes to running the ship, leading the crew, making tactical decisions, tending to the crew's health -- the Skills of every crew member (including officers and captain) on board are summed into a final, group value, called a Skill Pool. For example, your Pilot Skill Pool is equal to the sum total of every character who has Pilot Skill from their Job. Every Skill has a matching Skill Pool, so there is a Tactics Skill Pool, a Doctor Skill Pool, a Pilot Skill Pool and so on. These Skill Pools may be tested in many different operations, but are used whenever it is ruled that the crew can work together to triumph over a challenge. When totaling Skill Pools, any Skill Bonuses (such as "Pilot 0 (4)" on a crew's status sheet), these extra bonus points are only applied in the case of officers or the captain. In the case of crew, these are potential bonuses and only applied if the crew member is promoted.

The Skill Pools for Ship Ops, Pilot, Navigation, Electronics, and Gunnery are constantly in use when traveling, operating the ship, entering orbit, landing the ship on a world, or in ship-to-ship combat. These Skill Pools are compared against the requirements to run your ship to decide if you have enough skilled personnel on board to handle the spacing vessel. This comparison determines the exact Strong and Standard Dice that will be rolled in any Ship Skill Tests.

While a Crew supply Ship Skills, a ship and its components demand Ship Skill Pools of each type. A Ship's required Pilot is determined by summing the Pilot requirements from every component that it has installed in its hull. Perhaps the ship's Bridge requires 4 Pilot, and the Engine requires 6 Pilot, and the Pilot Assist Module requires 4 Pilot -- to a final demand of 14 Pilot. As components are upgraded or replaced, this number may change. Also, as components are damaged, they will drop out of this equation. If the Pilot Assist Module were to take more than 60% Damage, it would cease to function and the Pilot requirements of the ship would be reduced to 10. As seen below, having a good sized demand for a ship makes it more powerful, but having too large of a demand can be a liability.

As seen by the sliding scale, balance is key in staffing your ship. If you have an overstaffed situation (30 Pilot Skill Pool to 15 Pilot required by your ship) you should consider installing additional components on your ship that require Pilot so that you can increase your Strong to Standard dice ratio. Note that, as the Ship's requirements convert the type of Dice from Standard to Strong, having more Pilot required on your ship is a powerful thing, increasing your chance of succeeding at Skill tests as you get more Strong Dice. Therefore, ship components like Pilot and Nav Assists, Mass Dampers, Fuel Tanks all provide options to get better use out of your Crew's abilities and skills by increasing your ship's demand for Skills and therefore converting Standard Dice to Strong Dice.

However, having some wiggle room before you become understaffed is important, because a Pilot could die in combat, accident, abandon your crew, or get eaten by a xeno while exploring. If you are too close to the ship's Skill requirement (having 20 Pilot Skill Pool when 18 is required) then a single death of a crew member could knock you into understaffed territory, which is the worst possible place to be. On the flip side, as your Pilots level up and increase their Pilot Skill, the may drive the Pool to 40, and then you will be far overstaffed. At that time, you'll want to ensure you install more Pilot requiring components or consider firing some unneeded Pilots (look for the one sitting in the 6th co-pilot chair).

KEY VISUAL TAKEAWAY: The visual skill pools displayed in the status screen are optimized at 150% (blue skill bar is halfway); It maximizes your strong dice for any skill test. Below 100% exposes you to more severe penalties, above 200% does not give you additional dice. Once you reach the 200% maximum threshold you should consider upgrading your ship capabilities to gain more strong dice or consider reducing your crew counts in that skill to hire in different areas. 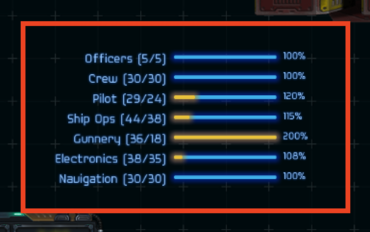 For example, consider the above graphic, with the gunnery skills at 200%. You should upgrade your ship's weaponry or you could fire some crew with Gunnery Skill to avoid having Skill points at or above 200%, as you gain no dice. Also, consider the trouble you might be in if an Electronics Tech walked out and left you understaffed? You might fire a Gunner and hire a new E-Tech, or upgrade your weaponry to a second dual-laced array battery since your crew could handle and maintain that firepower.

Whenever your crew, working as a unit, is called to pass a Skill test for Skills like Repair, Tactics, Command, Negotiate, Intimidate, Doctor and Explore, the crew's Skill Pool is used as the basis of the test. These Skills tests are made in relation to the command, operation, tactical decisions, and health of the crew and the ship, and therefore all the Skill Pool of all crew members is used when rolling these Skill tests. Remember that Skill Bonuses are only counted for officers and the captain.