The Stellar Falcon was designed for short-range interdiction and Quadrant patrols. This popular military hull puts an emphasis on torpedo range engagement and heavy internal shielding. Carrying a crew of 30, the Stellar Falcon is popular with Bounty Hunters and Military Officers alike. 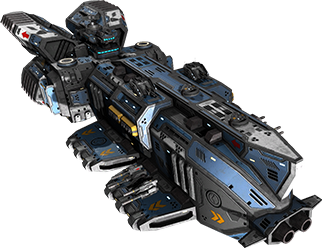 The Stellar Falcon is an unlock-able ship accessible at the beginning of a game if you set your Ship priority to A. The Dragoon Cruiser and Cautala Heavylift are also available at priority A. So why choose the Stellar Falcon over these two when it is a 6,000 mass ship versus the two (very similar) larger 7,000 mass ships?

The Stellar Falcon is a better starting ship for surviving rough encounters early on as the costs of travel and higher salary will hurt more in the larger ships. Starting with an extra credit buffer furthers this thought. It will perform better in most ship combat experiences early game because it is better at escaping and has better dice from its engine component. Its naturally high shielding is icing on the protective cake. It is, thus, the more conservative option for early to mid game play.

Going for either heavier ship is going to be tough to get going but either of them have more long-term potential than the Stellar Falcon due to their crew size and potential officer complement.