Please take a moment to fill out this survey on your gaming habits!

Factions and their Princes recognize the Trade Permits that a Star Trader may carry with the stamp of approval of a Faction. These Trade Permits are issued by individual Factions and are integral to the system of trading that supports the Star Trader civilization. They allow a captain to gain access to what might otherwise be considered restricted trading within the Star Traders Exchange. What may be illegal for an unlicensed merchant captain to sell on the Exchange may be perfectly legal for a Star Trader captain carrying a verified Trading Permit with the Faction’s seal. Trading Permits are another way that the Factions cater to Star Traders to gain their loyalty, business and services.

There are 4 levels of Trade Permits (Spice, Free, Full, Principal). Trade Permits can be obtained from select faction contacts, when a captain has sufficient reputation with the contact to be deemed worthy of such an honor. Not all contacts can issue up to a level 4 Permit. A Permit is only good with the faction that issues it, but it applies at all faction worlds throughout the galaxy.

WARNING: Once you have reached Rank 4, you have entered a highly monitored class of trader and scrutiny of your actions increases. Any transgression that causes a loss of Reputation of -2 or greater with the Faction will automatically cause you to lose a Trade Permit rank. This is true unless you have a military rank of 13 or higher. In that case, you will lose one military rank instead. However, if you have 100 or more faction reputation with the permit's faction, transgressions causing reputation losses of -4 or greater will be required to revoke your permit, not -2.

Resources for which you have legal permits for with the faction of a military ship that you surrender to will not be confiscated. (Pirates are a special case.)

Trade Permit levels correspond to the permit levels of trade goods. Each Trade good has a permit level from 0 to 4, with 0 meaning that the good does not require any type of permit. In order to trade a permit level 2 trade good for example, a trader needs a level 2 (Free Trader) trade permit or higher with the given faction. It is important to note that Trade Permits and levels have nothing to do with the legality of a particular good. Higher trade permits do not change whether a good is deemed legal or illegal in a given zone. It is also important to note that a good's permit level does not change across factions or zones. A permit level 3 good will require a Full Trader Permit on any world it is sold. The only exception being that Independent zones do not recognize Permits or permit levels on trade goods, thus making them ideal places to unload high permit level goods.

In addition to the stated benefits below, if you surrender to a faction pirate for which you have a level 2 Trade Permit (or are protected by virtue of a Trade Alliance Conflict, you will lose less morale than if you had your cargo looted (and considerably less than if you had no cargo and no permit.)

If your Reputation with the faction drops below -10, you are at risk of losing all grades of your Trade Permit. For each transgression that causes Reputation loss below -10, you may lose a Permit grade. However, if you have any Military Ranks, you will lose these first. Only one Rank or Permit is lost per act that reduces your Reputation. Given that lower military ranks are inexpensive, it can be a helpful buffer if you anticipate temporarily dropping below -10 reputation with a faction you have trade permits with. Trade permits will be lost before Edicts, effectively shielding those in the same fashion. 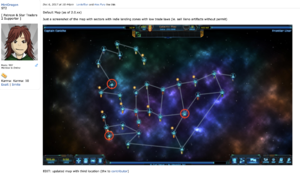 This is a map where shady captains can sell items, especially Xeno Artifacts which are always illegal, in the base game.