A catch-all term that describes a variety of carbon-based creatures which are extremely hostile to all other lifeforms across the galaxy. Xeno exhibit a general disinterest in each other but otherwise consume and destroy anything that stands in their path. Military minds, scholars and often too-eager lore experts categorize xeno as hive-based and insect-like in their behavior and biology. While there exists a wide variety of xeno lifeforms, they are all terrifying in combat, extremely hard to kill, and extremely lethal. Star Traders have had contact and conflict with the xeno for centuries but the Exodus has thrown the Star Traders into new galactic territory, much of which is infested with xeno.

Some of the Quadrants that were colonized by Star Traders after the great Exodus have been completely lost to the terror of the xeno and all human colonies have been wiped out.

The Terrox are the most common species in the galaxy. They are slow to expand territory and are ferocious on defence of their worlds. A Terrox Fleet attacked the colony ships that reached Cirm Quadrant. There Templar commander Major Luthor and a young Templar captain fought valiantly to save them.

These are currently implemented in the game. They're the most common xeno the player meets during random encounters, also being targets during xeno hunting missions. Their ships are heavily armed and armored, and the xeno creatures themselves are not to be underestimated in crew combat. Fortunately they lack strikecraft for support, so carrier builds are particularly deadly to them.

Recon from star traders across the quadrants have given us a snapshot at possible Xeno talents. This information cannot be guaranteed to be up to date due to the risks involved in acquiring it and the natural evolution of the subject matter. Many star traders gave their lives to acquire these secrets. Use them in valor, and with a spirit of gratitude. 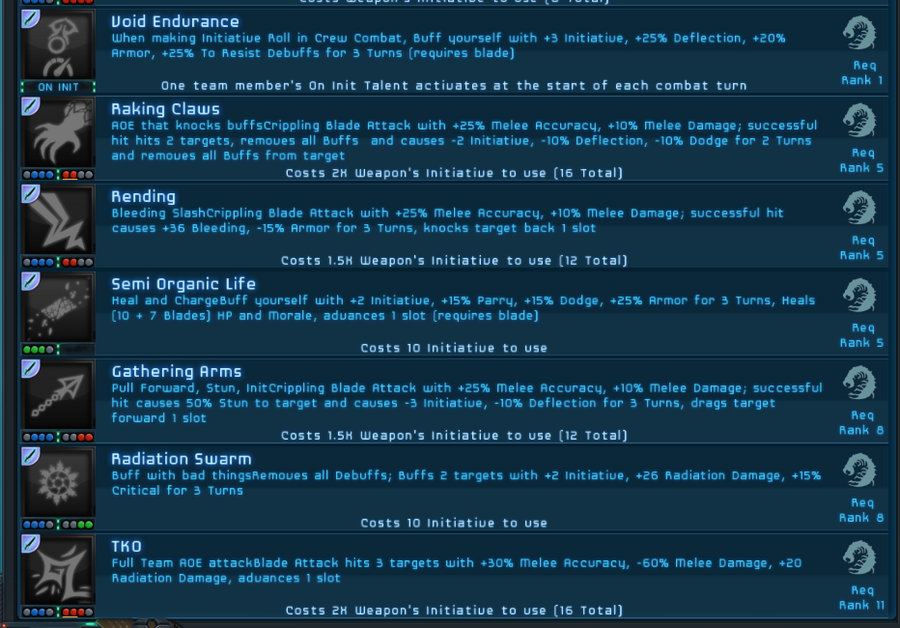 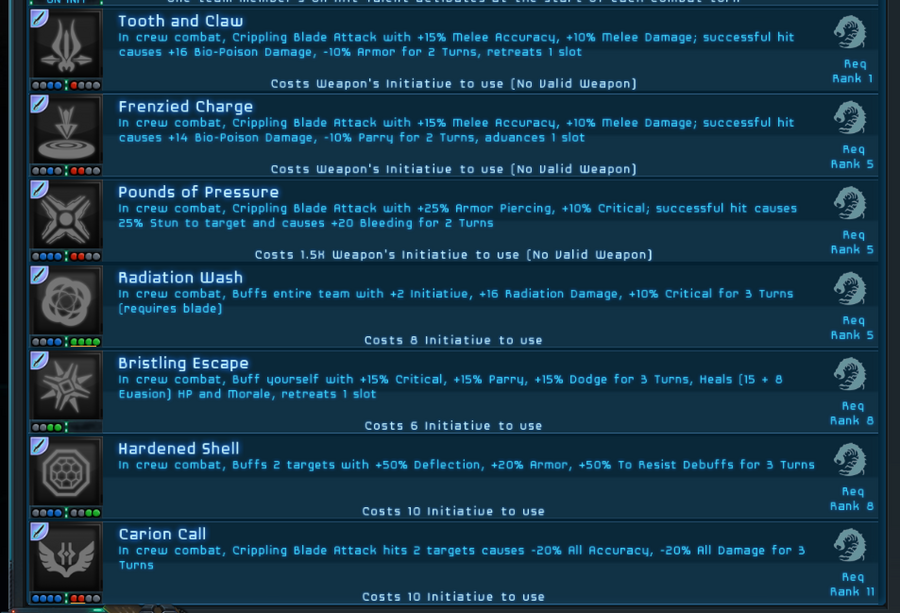 The Jyeeta are known as a slow moving menace. What they lack in speed they make up in pure toughness. Quick to multiply, they like gas giants and nebulae and are hated by the Javat, and their warships are infamous for aggressive boarding tactics and starfighter swarms. A massive Jyeeta attack led to the death of Shalun himself, though the Templars were ultimately victorious.

These are currently implemented in the game. They are first encountered during the Jyeeta War story arc. While Jyeeta ships are less sturdy than Terrox equivalents, they have equal firepower and are arguably more dangerous than the Terrox due to starfighter complements. Anti-starfighter builds, whether gun focused or keeping one's own defensive complement of starfighters, are highly recommended lest a player get immediately crippled by numerous starfighter-inflicted debuffs.

Jyeeta boarders are extremely deadly as well, and board more frequently than Terrox. They are more armored and have more health points than Terrox, so weapons with high armor piercing capabilities like sniper rifles and shotguns are useful. Fighting slowly and defensively is key to winning in crew combat against Jyeeta; one cannot expect quick victories. Debuffing them and buffing your own fighters will gradually wear the Jyeeta down, while healing talents will keep your fighters alive. Combat jobs with high evasion skill like the Swordsman are well suited to the front slots, while the aptly named Xeno Hunter is suited to Slot 4 due to heavy damage capability at standoff range.

The Zenga are a fast spreading species with a tendency to invade human worlds in search of food and raw materials. Colonists captured by the Zenga are never seen again and rumours of their fate can be devastating to morale.

The Krangg are a mysterious species of xeno favoring hyperspace combat fast moving ships and brutal hit and run tactics. Little is known of their origin but once they are aware of faction settlements they attack without mercy or warning.

The Xebolitis are a slow spreading alien species but should not be discounted as a threat. They tend to infest their worlds with millions of hostile beings and invasion of these systems require a dedicated battle force.

First encountered by a templar squad in Kinassis Prime, the Xytox are known for attracting degenerate Humans, sparking Xeno cults, revolutions and trade in banned artifacts. Beware of morale impacts when fighting Xytox.

The Red Zorga are a species of Xeno known for their rapid expansion and heavy aggression. Their ships are very fast, even for Xeno.

The Dark Terrox have rarely been encountered, but are one of the most dangerous types of xeno. The Dark Terrox slaughter with extraordinary speed, and are difficult to kill even by xeno standards. It is unclear if the Dark Terrox are a variety of Terrox or a separate species entirely.

Perhaps the weakest xeno species, the Knife Alien travel in ships smaller than those of most other xenos, and are only slightly more dangerous than average human soldiers in personal combat.

The Xeno origins stretch back to the time of the Alfaan and Xarth. These two great races fought a long and brutal war that left the hyperwarp in ruins. Each race worked to counter their enemy's strengths. As the Alfaan were energy based creatures, they created the Xeno, a carbon based lifeform that would be their weapon against the Xarth. The various races of Xeno likely worked much more cohesively at this point, serving as one vast hive, differentiated into genetic castes, rather than separate groups of predators that we see today. After the end of the war and the disappearance of the Alfaan, the Xeno effectively went feral, spreading across the stars, infesting worlds and killing whatever they found.